The route is based on lmfurb's guide and implements some optimizations that runners came up with time. These differences come down to:
• picking up less resources at the start of the game
• send the Illwrath to battle Traddash much later in the run
• convince the Traddash to fight Kohr-Ah
• optimally use the natural occurring portal to get to the Talking Pet faster

As the "any%" implies, we only do the most necessary objectives to complete the game. This means that you won't meet up with all Aliens and leave some 'loose strings'.

Dialogue options are marked in bold, e.g. 1x3-2x2-1 means that you have to select the first dialogue option 3 times in a row, then 2 times the second, lastly the first option. You can skip through a dialogue by pressing the "Shift" button when the alien is speaking.
Essential objects are marked in italics.
Targets are written in the form of System Planet-Nr Moon-abc, e.g. Sol 3a = Sol, 3rd Planet, 1st Moon (Earth's Moon)
The first section up to the natural occuring HyperSpace Portal is on a tight timer. Which means that you need to perform all flagship-navigating actions swiftly. Time doesn't pass while you're inside the game menu, planet menu, fights or dialogs.

QuasiSpace Map
I'll be referencing the portals with this lettercode: 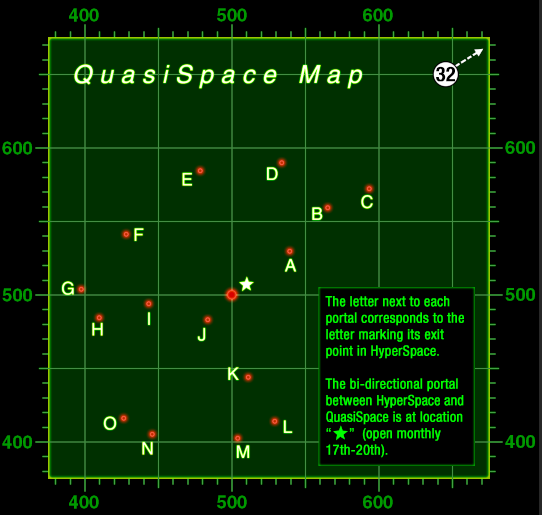 After you start a "New game" mash Shift or ESC to skip the intro. This way you'll likely enter the game in the menu, so make sure you exit via "Navigate" next.

30. "another 2 weeks later at Earth's Starbase" 4 -> go to Outfit Starship: +1 fuel tank & max fuel (for safety +1 crew pod & crew it up) -> go to Shipyard: get 1-2 Utwig Jugger and 2-max Chmmr Avatar
31. Fly to Delta Crateris via portal D -> talk to Talking Pet to start distraction 3 -> fight 3x Ur-Quan Dreadnought and 3x Kohr-Ah Marauder ideally with Utwig Jugger -> fight Sa-Matra ideally with Chmmr Avatar (or with the Pkunk Fury if you still have one)

• The optimal route for each run is a bit dependent on ingame time -> e.g. depending on how many encounters you had with ships it might be possible to catch the natural portal sooner or later into the run (to go to the Talking Pet/Umgah).
• Normally it is faster to manually steer your flagship to the desired star system and not use autopilot. The only exception is going from Sol to Alpha Pavonis at the beginning of the run.
• Adjust the ship-angle towards your next target. E.g. before you exit Sol on your way to Alpha Pavonis you can point the tip of your flagship north because that is the direction you'll head.
• When leaving a planetary system to hyperspace certain directions are faster than others due to the position of the planet in the system & due to the zoom-steps of the game. If there are enemy ships in the game it adds another level of difficulty to figure out which direction is the safest and/or fastest.
• Mashing through autoscan on a planet is slower than if you dispatch the lander directly. Assuming you have memorized the landing point of interest.
• It takes less frames to enter a quasispace portal if your ship is aligned north.
• The velocity in horizontal direction is larger (4.8 SDU/s) than the velocity in vertical direction (4 SDU/s) -> This means that some horizontal routes are usually preferable. (SDU = Standard HyperSpace Distance Unit)