Not to be mistaken by the far more well known glitch involving the avalanche, this particular glitch has been known by some runners for quite some time and yet no real guide to help better understand this glitch.

First, since this trick involves using magic it should go without saying that you need gold armor to start this stage with. So long as you have that, just follow the below steps to get the glitch:

1.Once near the first set of spikes, stop and activate your magic (weapon doesn't matter) to trigger your I-frames.

2.While invincible, move right until you're in the correct position. 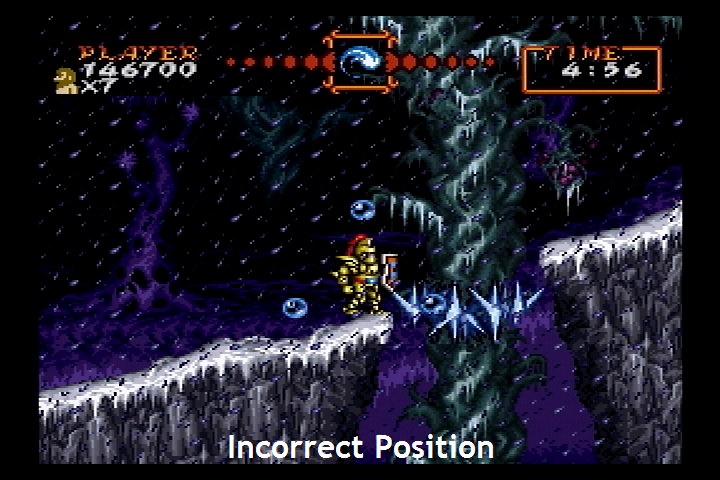 If you are not far enough right, Arthur will be at the highest point as shown above. This is how you will know you're positioning for the glitch is incorrect. 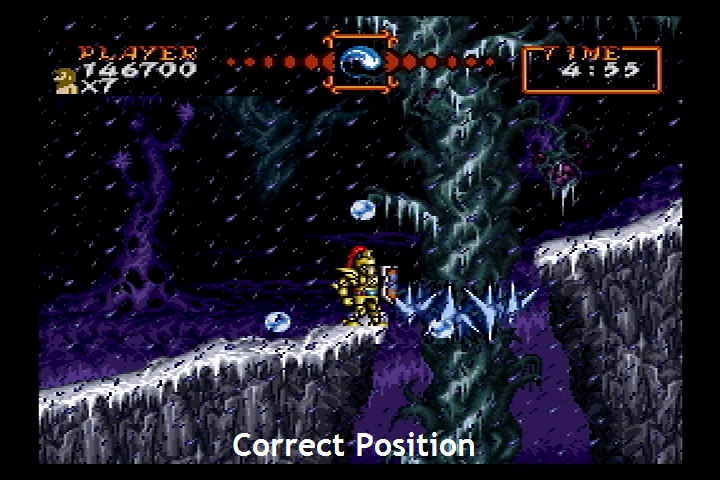 In comparison, this picture above you can see Arthur has somewhat "sunk' into the ground a little. This is the position you want to properly do this glitch.

If done right, it'll look like you got hit and messed up when in fact you both activated your magic and got hit on the same
frame, putting you in the glitched state. Here's a video below of it being done properly.

Can I do this without having to activate magic before the spikes?

No. If you try this you will actually hit the spike before sinking into the ground. For whatever reason, when Arthur has reached the point where he sinks into the ground he is actually already touching the spike. Why he doesn't get hit after coming out of I-frames is anybody's guess but that's how it works.

How precise is getting the correct position?

Not very precise at all. As stated before, once you've sunk into the ground you're already technically touching the spike. So as long as you don't move at all once you're out of I-frames, you shouldn't get hit at all.

Is this really faster than just doing the stage normally?

Technically speaking, not really. While it is true that the use of the glitch makes Stage 5 faster, the time saved from it will just be lost in Stage 7 trying to reclaim gold armor. However given the multitude of things that can go wrong in this level, it is a much safer and consistent way of doing the stage with the only real trade-off being that you're forced to do a decent amount of both Stage 6 and 7 with basic/naked Arthur.

An argument can be made to do it with torch in actual runs though since the avalanche glitch is pretty much required to do the last section of stage 5 fast with it anyway.

If you want to pull off the this trick real fast though check out dice's setup of the same glitch in action below: