I was interested in speedrunning this game and I though that some things could be improved,
Using a TAS tool I managed to prove several things that could be used to improve the run.

Imagine the speed of the balls as the settings on a fan, pressing once on the right button makes the balls rotate at a constant higher speed. As pressing left makes them spin at a slower speed.

Holding the right button won't automatically reach the fastest speed tho, mashing until you don't see any noticeable speed change is the easiest way to save time RTA, but then you no longer need to do it, the speed remains the same after each ball is picked;

The ball speed defaults to what I later explain as "lvl 4" once you re-enter a game.

Technicalities:
A full revolution of the balls rotating has 256 frames of animation
there are 9 different speeds the balls can rotate.
considering the initial unchanged speed as the game starts as "lvl 4":

So to reach from the initial lvl 4 to lvl 9. you need to press the right button 6 times.

The time it takes the ball to go from the wheel to the bin on the left side is almost identical if you pick the ball on the very first or the very last frame possible.

Although, if the ball is picked at the very first frame (as done on the current wr) there is a significant time loss by not allowing the wheel to rotate further before you pick the ball.

In the following video I recorded two TAS and overlaid the recordings over each other.
On one recording I pick the "Y" ball on the very first frame possible, and on the other recording I do it on the very last possible frame.
Then, if we consider the "A" ball the last one of the bin (I didn't do all three for simplicity) you can notice the difference in time the ball takes to reach the bin.

In both recordings After the "Y" ball is picked, the "A" ball is then picked at the first possible frame to visually show the difference in time.

By using savestates and the TAS tool, I noticed that even though the letters used on the balls seem to be uncontrolable RNG, the position of the set of balls that are considered correct always starts on a fixed point on the wheel when the game starts regardless of when you select the stage.

In other words, taking the previous video as an example, I made a savestate before entering the "A=A" stage,
the order of the balls were "Y" then "A" then "X". and the wheel started those letters on the following position: 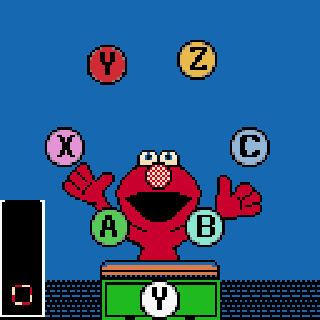 If I would reload my savestate, wait a bit, and then start the game. The letters in the balls would be diferent, but the position of the first, second and third ball is the exact same. (I even managed to get a savestate with the same "A=A" pattern as the current WR )

Tho if I would reload the same savestate, hop on to the "a=a" level, quit out, and then go to the "A=A" level. then the position of the balls would be different. The same thing if I would power cicle the console (reset emulator).

So far these are the three main things I've managed to confirm. I'm currently working on more TAS for this game to see if there is a possible way of RNG manipulation.