Welcome to the Randomizer speedrunning guide. The Randomizer is a mod that swaps around most charms and movement abilities. The mod can be downloaded via the Resources section. This guide assumes you're already quite familiar with the game and its mechanisms. If you need help, come ask us in the Hollow Knight Discord channel in #modding.

The goal of the Randomizer is to obtain those items:
● Mantis Claw
● Dream Nail
● Either Crystal Heart or Isma's Tear

Those are the mandatory items to beat the game. Once they are obtained, just complete the game like you would in Any% NMG.

There are also the following items that can be used to kill the Baldur to access Greenpath:
● Glowing Womb
● Mark of Pride
● Weaversong
● Spore Shroom
● Grubberfly's Elegy

● How much time you will waste if you explore the area with your current key items compared with exploring it later on.
If you don't own all the items required to fully explore an area, getting back there again will result in major time loss.

● How many items can be obtained and how quickly. It might be worth exploring an area right away and get lucky with a useful key item than waiting til the end game.

The goal is to find a balance between the two. This balance changes as the game progresses. For example, getting Baldur Shell early on without Claw can be considered as a time loss because you would need to get back there for Grimmchild and Joni's Blessing once you get Claw. However, in the late game, if Claw is the only mandatory key item left, it doesn't matter because you will never go get Grimmchild and Joni's Blessing. (If you get Claw, you will just go finish the game.)

This tool indicates the list of accessible items based on the currently owned key items. 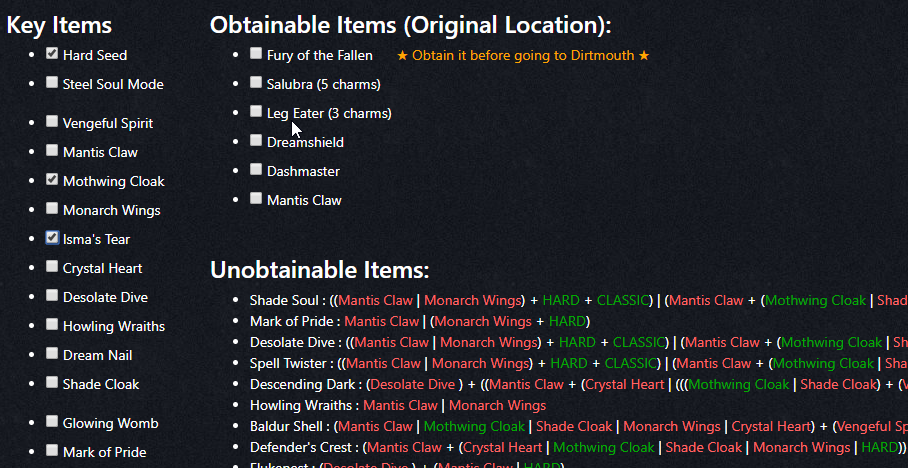 The beginning of the game is always the same. The goal is to access the vendors and get Geo.
Failure to get enough Geo will result in major time loss. I recommend getting Geo rocks that are on your way and that give at least 3 Geo per second. All Geo rocks in the maps give 3+ Geo/second unless stated otherwise.

● Leave King's Passage.
● Once outside, walk a bit to trigger Dirtmouth respawn point.
● Go back and get Fury of the Fallen (by pogo-ing). Savewarp.
● On your way to VS, kill Husk Guard for Geo. Get VS and use the bench at VS to respawn the Husk Guard.
● Open Stag station.
● Free Sly.
● Shade skip to salubra.
● Buy all key items except Dream Nail and Howling Wraiths. Those two key items are only useful end-game. Keep your Geo for the early game key items.
● Savewarp then go to Dirtmouth.
● Buy key items from Iselda and Sly.

If you don't have enough Geo, kill the Husk Guard then rest at the stag station bench (~1 Geo/sec).

The first region you'll want to explore depends on the key items you have collected. In general, this is what I recommend.

Dash and can kill Baldur:
Greenpath
● Lots of Geo
● All items accessible
● Getting other key items won't make this area faster

Dash and can't kill Baldur:
Option 1: Resting Grounds via Crystal Peak
● Requires doing the dark room which can be hard
● Takes about 4 minutes to 2 items
● Can get all accessible items, but you will most likely need to come through Blue Lake anyway to unlock City of Tears (except if you get Dive).

Wings:
Resting Grounds via Blue Lake using shade soul skip
● You will need to do it eventually anyway.
● Unlocks City of Tears which gives access to relics trader (Geo) and nail upgrade.

Claw and can kill Baldur:
Greenpath
● Lots of Geo
● All items accessible
● Getting more key items won't make the exploration of this area much faster.

Claw and can't kill Baldur:
Fungal Wastes
● 3 quick items (Leg Eater) but will most likely requires farming Geo. However you can explore the entire area first then buy the key items.
● All items accessible
● Best option if you have leftover Geo

When and how to access:
Ideally accessed via Shade skip which requires Wings or Dash+Claw (or just VS if you're try-hard).
If you're stuck, access from Crystal Peak (requires doing the dark room and takes about 4 minutes to get 2 charms and stag station).

Get Soul Eater and the nearby Journal as soon as you can. (Requires Dive and either Claw or Wings).

When and How to Access:
Ideally accessed from Crossroads right after obtaining either Claw, Wings or Dash. Even if you don't own those key items, the time loss is minimal (~1 min slower). Accessing from Crossroads requires a way to kill the Baldur: Glowing Womb, Mark of Pride, Weaversong, Spore Shroom, Grubberfly's Elegy, Dive or VS.

You normally want to do Greenpath before Fungal Wastes because of the Geo you will get.

Route
● If you have Dash, get Thorn of Agony first.
● Get Stag station and Journal.
● Fight Hornet and savewarp.

When and How to Access:
Accessed from Greenpath Stag station. Going from Dirtmouth is a lot slower. To fully explore the area, you'd need Claw, Dream Nail and either Crystal Heart, Dash or Wings if coming from Greenpath. However, waiting that long before obtaining the quick Baldur Shell is most likely not worth it.

If you feel Claw will be obtained late in the game (ex: you already have Wings, Crystal Heart or Isma's Tear), go for Baldur Shell right away (only takes about 1m30 including the saveswap). Otherwise, wait until you have Claw.

Route
● Get Baldur Shell
● Get Grimmchild
● Get Joni's Blessing and savewarp.

When and How to Access:
Ideally accessed from the Crossroads after getting claw and lots of Geo. Semi-ideal if you only have Wings.
If you have neither key items, not all items can be obtained in a single run which results in major time waste. Fungal Wastes can be access from Queen's Station with VS only (use if you're stuck) 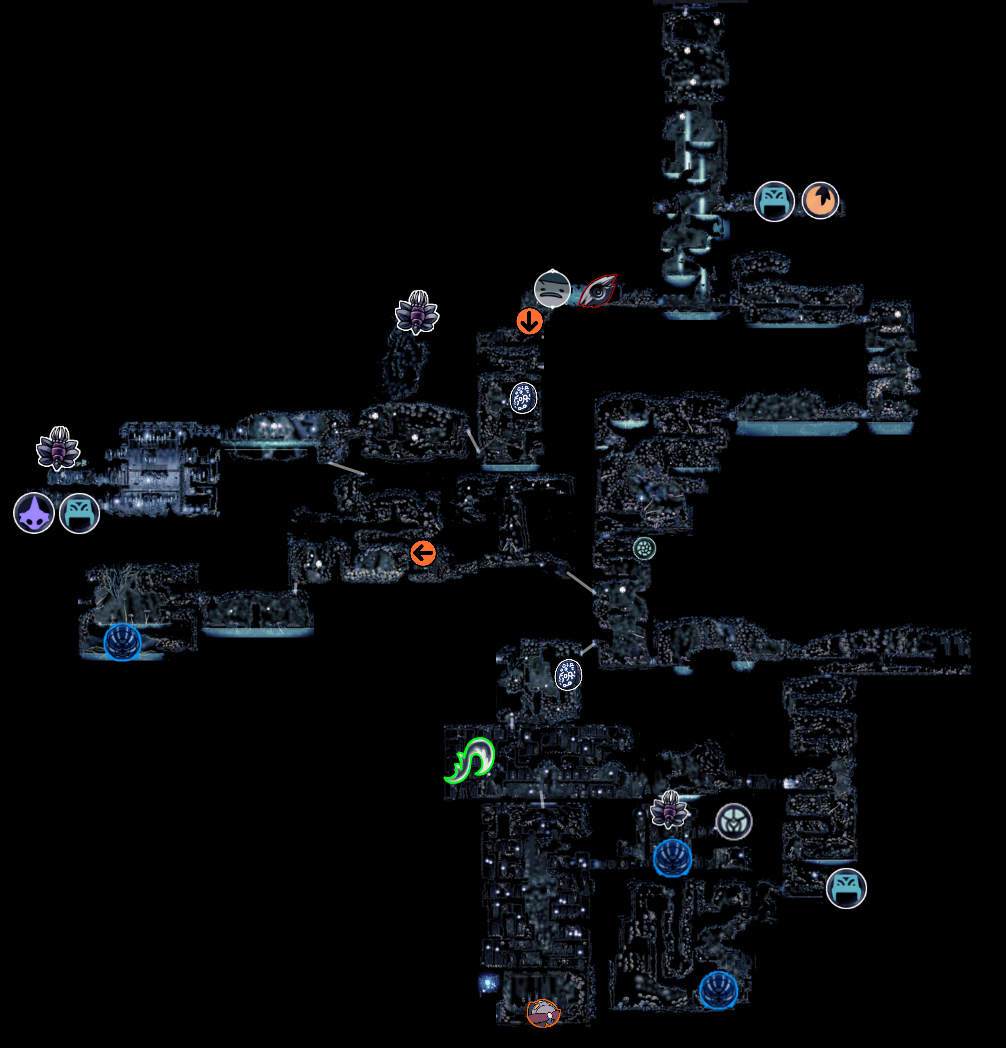 Routes
● Bench at Leg Eater and buy his items. If you don't have enough Geo, you can farm the Shrumal Ogre (1 Geo/second).

If only have Dash:
● Go unlock Queen's Station shortcut (the south one). You'll need it when you'll come back.
● Get Dashmaster then Claw. Savewarp.
● Kill the Shrumal Ogres for Geo and Notch on your way to Queen's Station

If have Wings:
● Use the shortcut to arrive from the top to the Claw area.
● Activate Mantis Lords area lever (by pogo-ing the spikes) then get the Claw.
● Kill Mantis Lords then savewarp.
● Come back and get Mark of Pride, the Seal and the 620 Geo chest.
● Get Dashmaser. Savewarp.
● Kill the Shrumal Ogres for Geo and Notch then get the two Seals on your way to Queen's Station
● Note: Another possible route involves resting at the Dashmaster bench but it's about 30 seconds slower and it's harder because it involves pogo-ing monsters to access Queen's Station.

If have Claw:
● Use the shortcut to arrive from the top of the Claw area.
● Activate Mantis Lords area lever (by pogo-ing the spikes) and get the Claw.
● Kill Mantis Lords then get Mark of Pride, the Seal and the 620 Geo chest.
● Get Dashmaser. Savewarp.
● Kill the Shrumal Ogres for Geo and Notch then get the first Seal on your way to Queen's Station.

When and How to Access:
Ideally accessed from Fungal Wastes.

If have Claw or Wings:
● Get Spore Shroom (requires Shade skip if only has Wings).
● Savewarp
● Get Seal, get Howling Wraiths, savewarp.

When and How to Access:
Access this area soon as you can do Blue Lake early (requires Wings or Claw+Dash). The relic seeker Lemm will give enough Geo to buy the items you need and most likely enough for Lumafly Lantern too.
Even though you can access City of Tears with only Dive, I don't recommend doing so because nothing will be accessible other than Flukenest.

Route
● Upon arriving from Resting Grounds elevator, get the Journal on the way to the elevator.
● Make sure to have at least 300 Geo to unlock the Stag Station. The enemies in the area drops a lot of Geo. If you are really poor, use the Stag station bench, go kill the Gorgeous Husk then savewarp.
● Get the Seal at the elevator by pogo-ing the spikes.
● Depending on how many relics you have found so far, you may or may not want to kill the Gorgeous Husk.
● Get to the Watcher Knights bench.
● If you already have Claw + Dream Nail, you may want to kill Watcher Knights right away especially if you have good spells.
● Use the bench near Cornifer (coming from the elevator shortcut).
● If you have not many relics, you may want to get the extra Seal in the big open map left of Lemm.
● Sell relics to Lemm.
● Get Nail upgrade. Not as needed if you have good spells however.
● Savewarp.
● Get Spell Twister and Dive.
● To leave Soul Santctum without Claw, you will need to pogo off monsters and furniture in the last room. Make sure to not kill them all. Don't get the Seal with only Wings as you will get stuck.
● Get the Simple Key on your way to the City Storeroom Stag station.
● Use the Stag station to go to another area.

This will get unlock 4 items (Crystal Heart, 2 charms from Sly and Shade Soul).
I suggest going there once you can use the easy route or when Claw is the last mandatory key item to obtain.

Deep Focus can be accessed with Wings and Dash by pogo-ing the crystals. Note however that you will get stuck after getting the charm. Once you have opened the passage, the enemy that spawned nearby will be gone forever so you will no longer be able to continue without Claw. In short, get Deep Focus last.

Only go there if needed. Getting King's Brand sets a hard save. The bench near King's Brand can be accessed with Wings by pogo-ing rocks.

Routes
With Isma's Tear:
● Get King's Brand
● Get Quick Slash
● Savewarp and go back to City of Tears.

Without Isma's Tear:
● Get Quick Slash. If you don't have Claw, this will require pogo-ing enemies.
● Get King's Brand
● Go back to City of Tears.

Only go there if needed as it is quite time consuming and make sure you have all the necessary key items to access everything. Unlocking the Stag station requires Wings and Claw.

Only go there if needed.

Only go there if needed. It requires Tram Pass which is very slow to get.

For example, if you get Dive from Fury of the Fallen, this means you were supposed to get Claw before getting Dive. This means Claw can't be at Descending Dark, Flukenest, Soul Eater nor Quick Slash.