This is the speedrunning guide for the 112% All Bosses category.
All bosses means it includes all the pantheons in Godhome, which makes this quite a difficult category.

The route is separated to 4 parts:

Part 3 - Area Sweeping
With all movement abilities unlocked, this part is just clearing all the areas for completion
● Difficulty is varied throughout this part

Part 4 - End Game
All the harder stuff: Colosseum, Flower Quest, White Palace and the Pantheons.
● Actually wasting time writing you this to inform you this is the hardest part.
● Grubfather visit is a 2 minute break. Use it wisely.

Practicing & Resources
● You can find practice save files under Resources for this category (soon).
● Fireb0rn's Any% NMG guide explains some of the early skips in depth, I would really suggest checking it out: https://www.speedrun.com/hollowknight/guide/j234z
● There is a cheat info program under Resources to give yourself infinite soul and health to make practicing stuff easier.
● You can always ask questions on HK's discord server.

Important Notes
Patch - The most optimal patch for this category is 1.4.3.2.
Essence - All Dream Bosses give a total of 2700 essence, which is 300 more than required.
That means you can skip gathering the essence of a few Grave Warriors, but make sure to do so only after beating them.
Language - On Chinese / Mandarin the text boxes are much faster, so make sure to change that in the game options, once you are familiar with the dialogues of the game.

Fury of the Fallen at the start of the run:

¤Make sure to move just a tiny bit to the right after the screen transition to trigger the hardsave.

You can use FotF on False Knight and Hornet if you are comfortable on those fights to make a bit of the time loss.
*Baldur one shot is not possible anymore.

Use the fireball skip (Gif by fireb0rn):

Or the mosquito skip as a beginner / back up strategy:

After save warping back to the Ancestral Mound, go to Fungal Wastes. 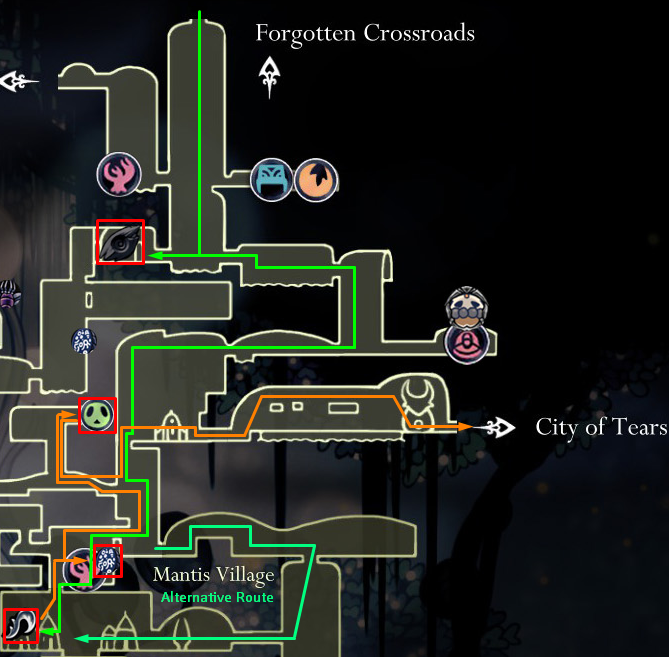 *Explosion pogo on post Lifeblood patches is much more difficult, alternative route for the explosion pogo is specified on the map.

Get the Journal and the grub after Mantis Claw. 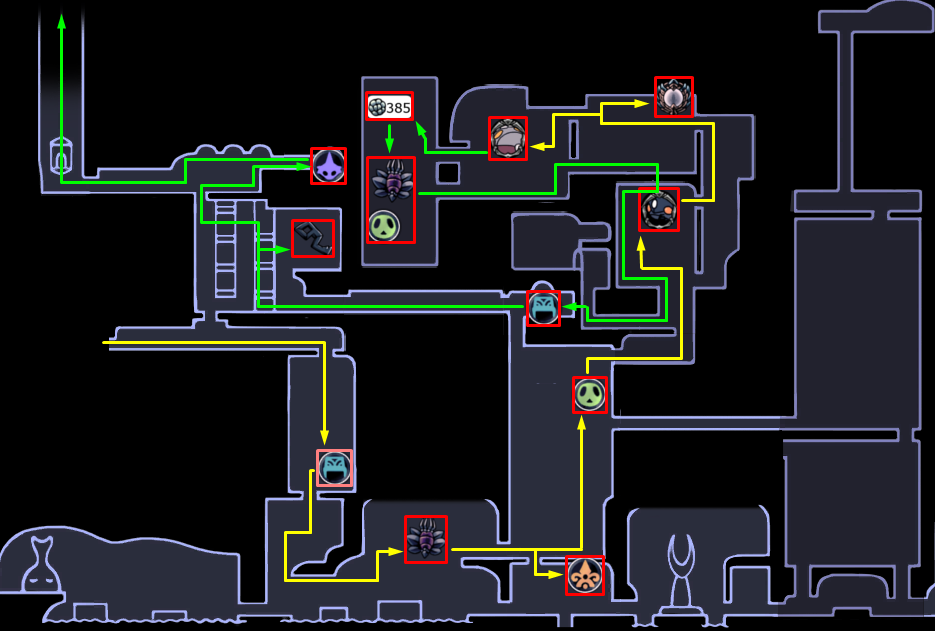 Get the rafts seal before Lemm.

If you don't manage to get the fake dive, you can come back for the grub later (after Soul Tyrant).
Save at the bench after Soul Sanctum, and don't use any other benches to be able to save warp back here later.
Make sure to unlock the Storerooms Stag Station, as it will be needed later in the run. 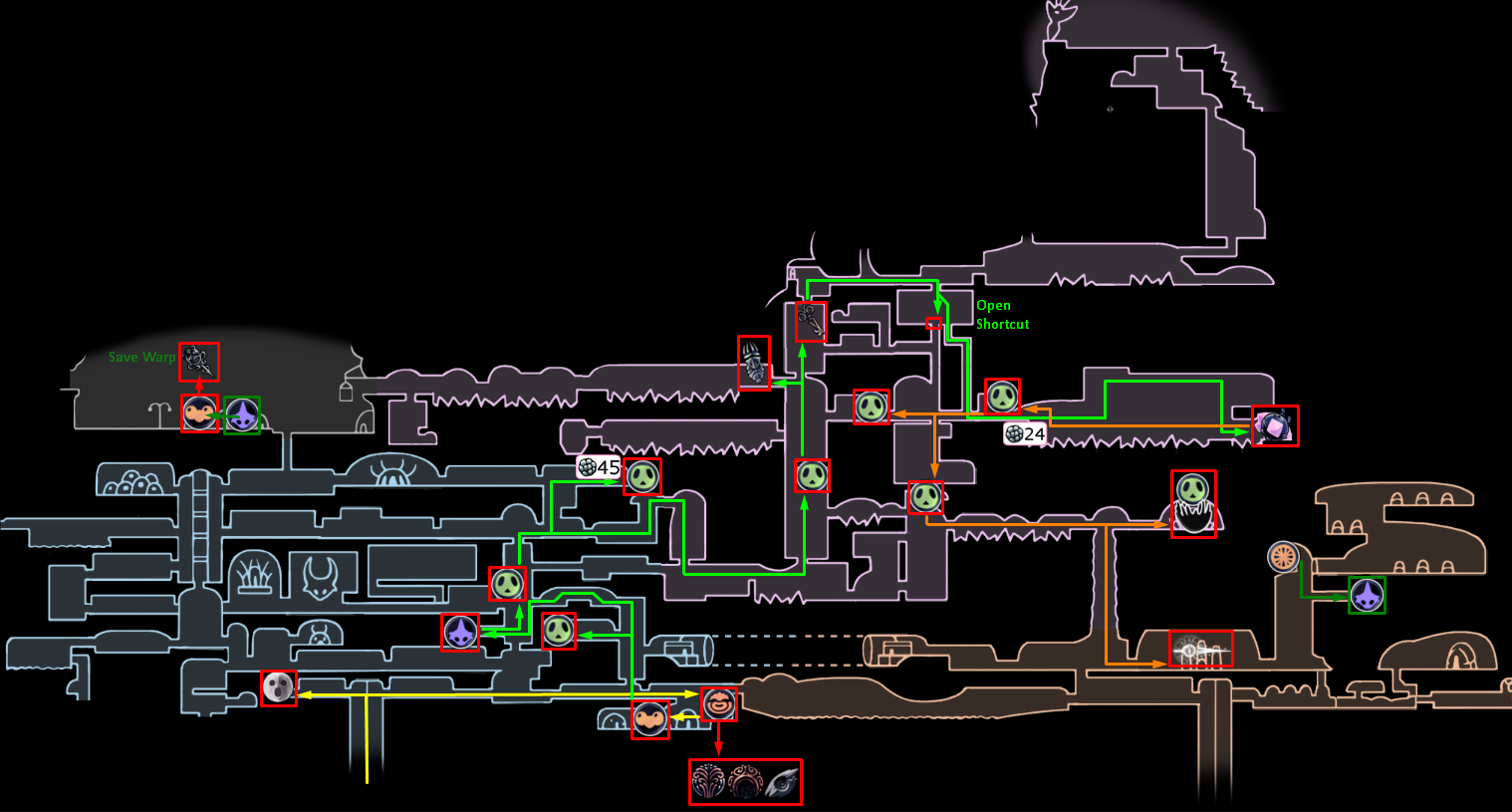 Buy Shaman Stone + Steady Body + Charm Notch.
Don't forget you cannot use any benches.
After opening Crossroads' Stag Station, keep track of your Geo count. You will need 800G for Elegant Key, so if you are short, make sure to get the backup Geo sources specified on the map.
Build a bit of soul before entering to Crystal Peak, either from enemies or the statue near the elevator to CP.
Make sure to get the King's Idol, Shopkeeper's Key and open the shortcut.

After dream nail, stag over to Dirtmouth and buy the Elegant Key. Then Save Warp back to CoT. 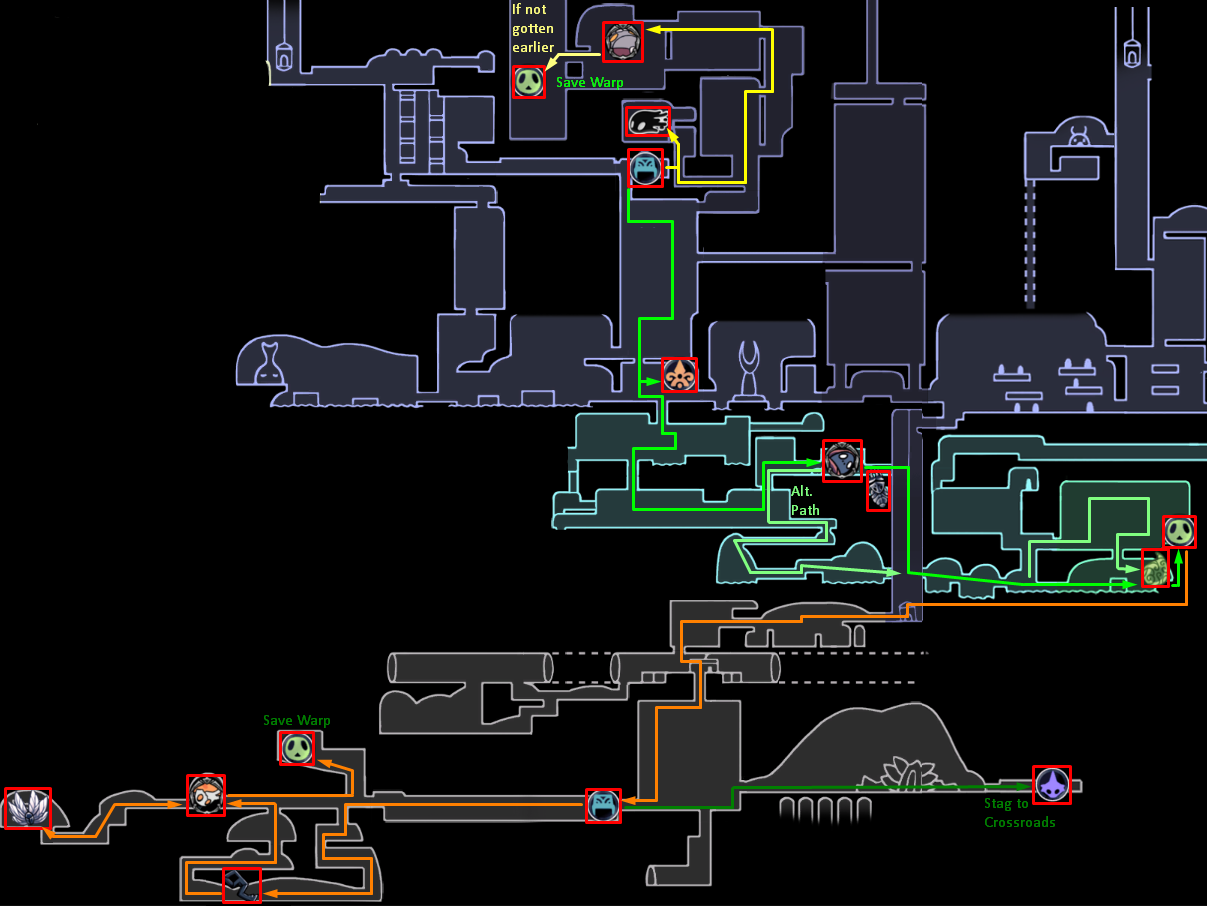 Don't forget to get the grub after Soul Tyrant if not gotten earlier.
Build a bit of soul before Dung Defender and interrupt his entrance with a dive.
Try to save soul for a dive after the fight for the Idol under the valve.

¤Use the alternative path if you are not comfortable with these skips.
You can equip Defender's Crest to make Lost Kin a bit easier.
Don't forget the Simple Key on the way to Broken Vessel!

A small shortcut before Broken Vessel:

When reaching the Hidden Station, stag to Crossroads for Glowing Womb + Failed Champion.

Since you can't chain dives anymore, you can use Shade Soul triple hits instead.
*The key is keeping enough distance while firing the fireball right as FC's mace is hitting the ground on your side.

Head to the Howling Cliffs to start the Grimm Troupe quest.

Use the Early Stag Nest Skip:

Joni's Blessing & Baldur Shell can be left for later when returning for the Banishment.

Before continuing on to Hornet 2 and Shade Cloak, we'll complete the 1st cycle of flames collection since that way the next cycles are going to be easier to get.

Use the elevator skip to get to Crystal Peak:

Buy the Lumafly Lantern before heading to Greenpath! 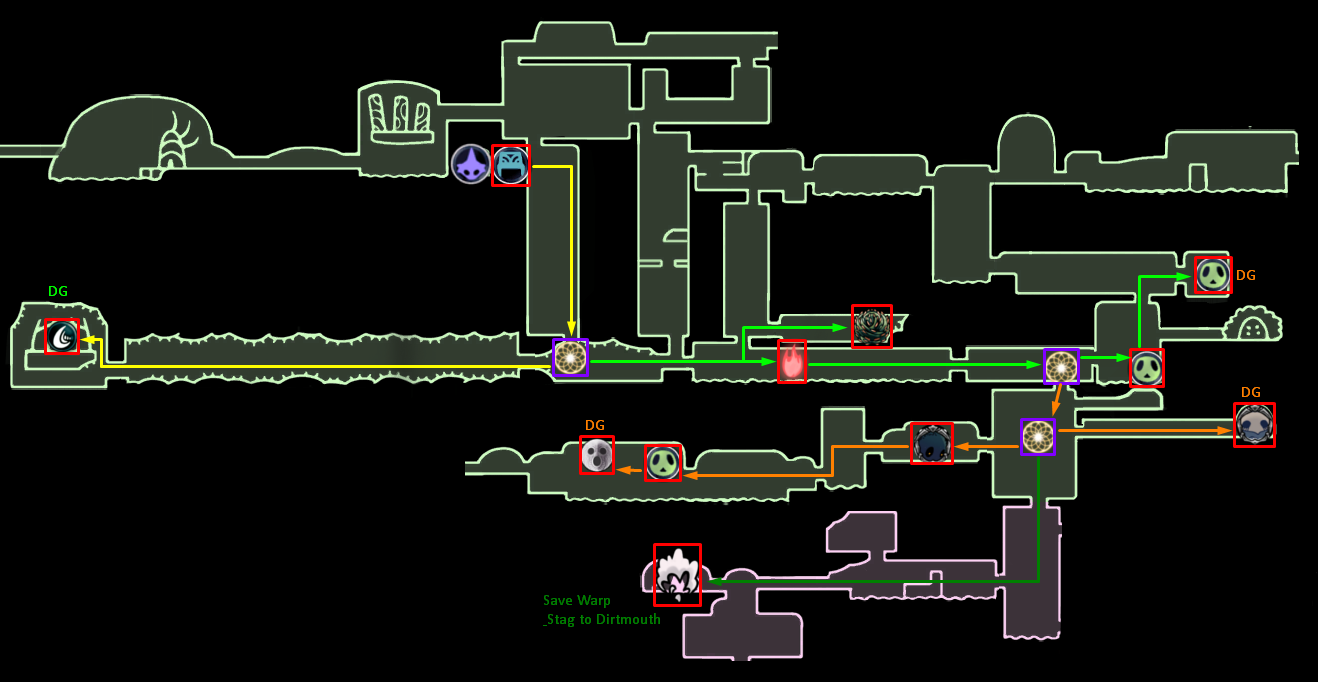 City of Tears Fetch
Just stag to the Storerooms Station to get that one.

Complete the 1st cycle of flames collection, and then immediately get the The Grimmkin Master in King's pass.
Afterwards stag to Resting Grounds. 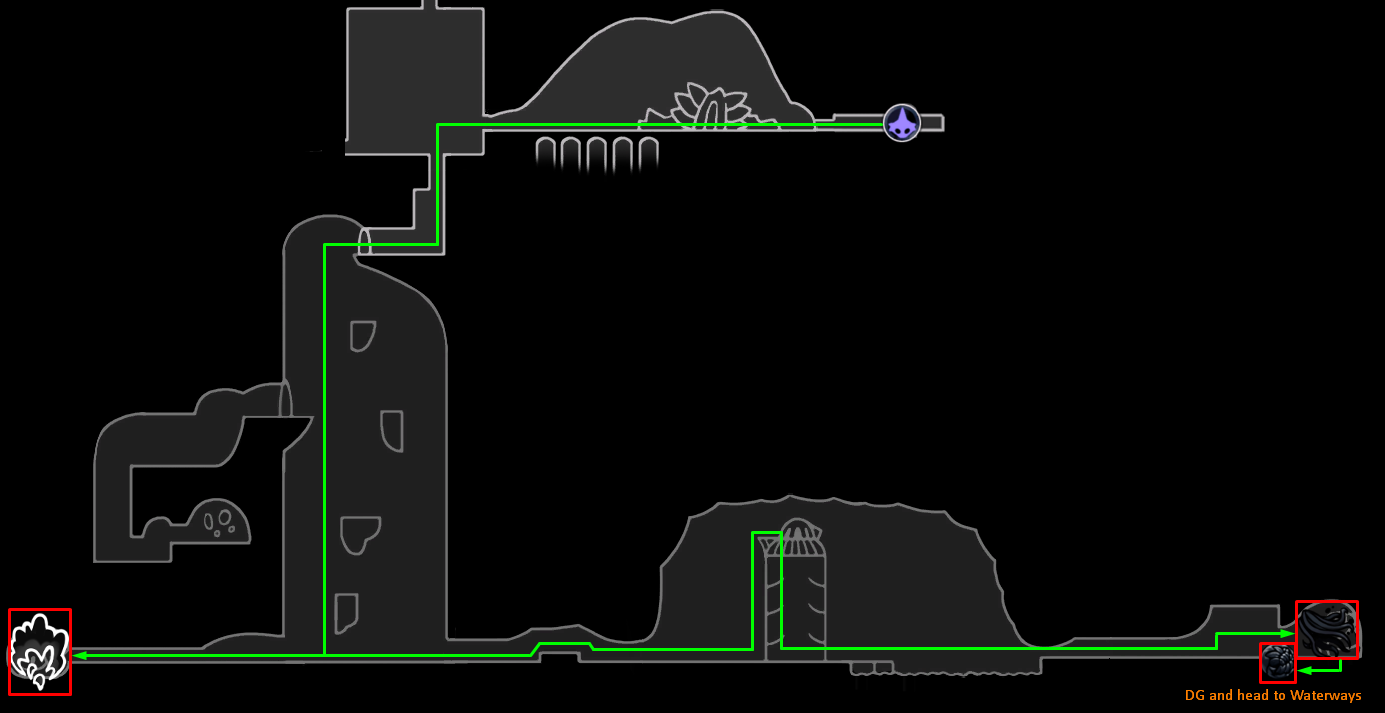 Make sure to get the Arcane Egg after Shade Cloak, then Dream Gate back to King's Station.
After completing the Waterways / Fungal Wastes section, Dream Gate back and stag to Dirtmouth.
In Dirtmouth beat Troupe Master Grimm, then continue on to the 3rd part of the run. 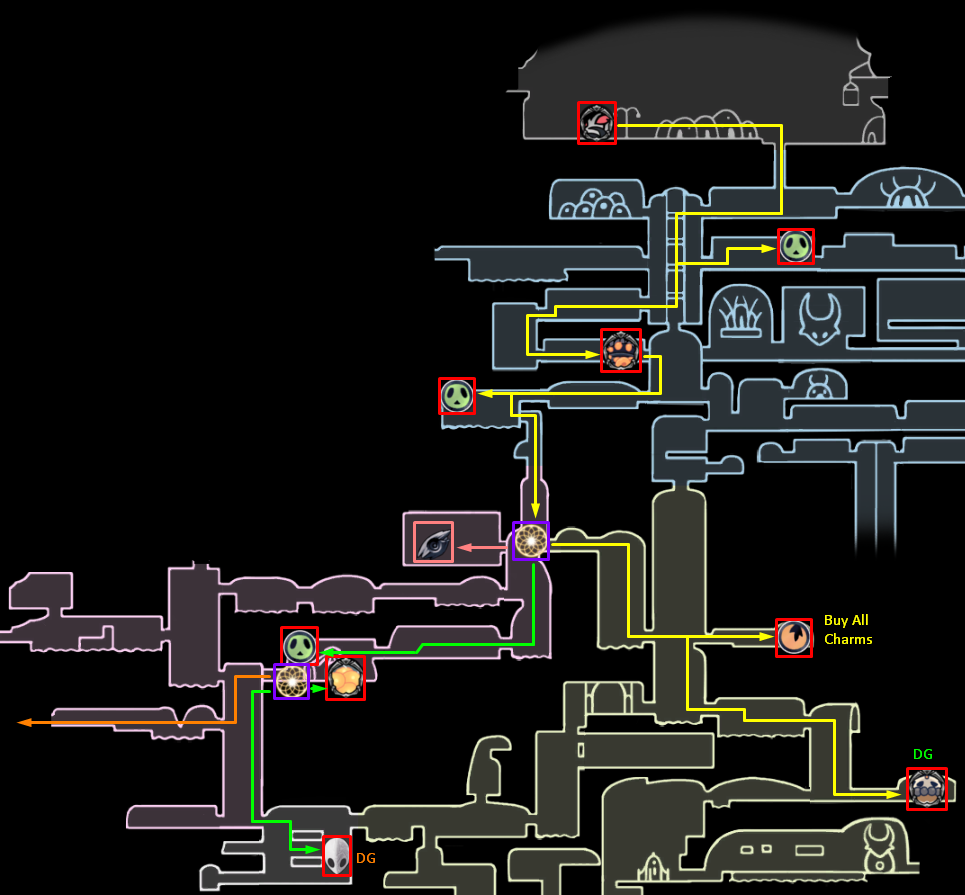 You can spend ~20 seconds to get the optional charm notch if you feel like it will benefit you.
While shouldn't be needed, you can equip Defender's Crest before Leg Eater to get a 20% discount on his charms.
Set a Dreamgate before entering Teacher's Archives, return to it after Monomon.
Don't forget Queen's station's Mask Shard. 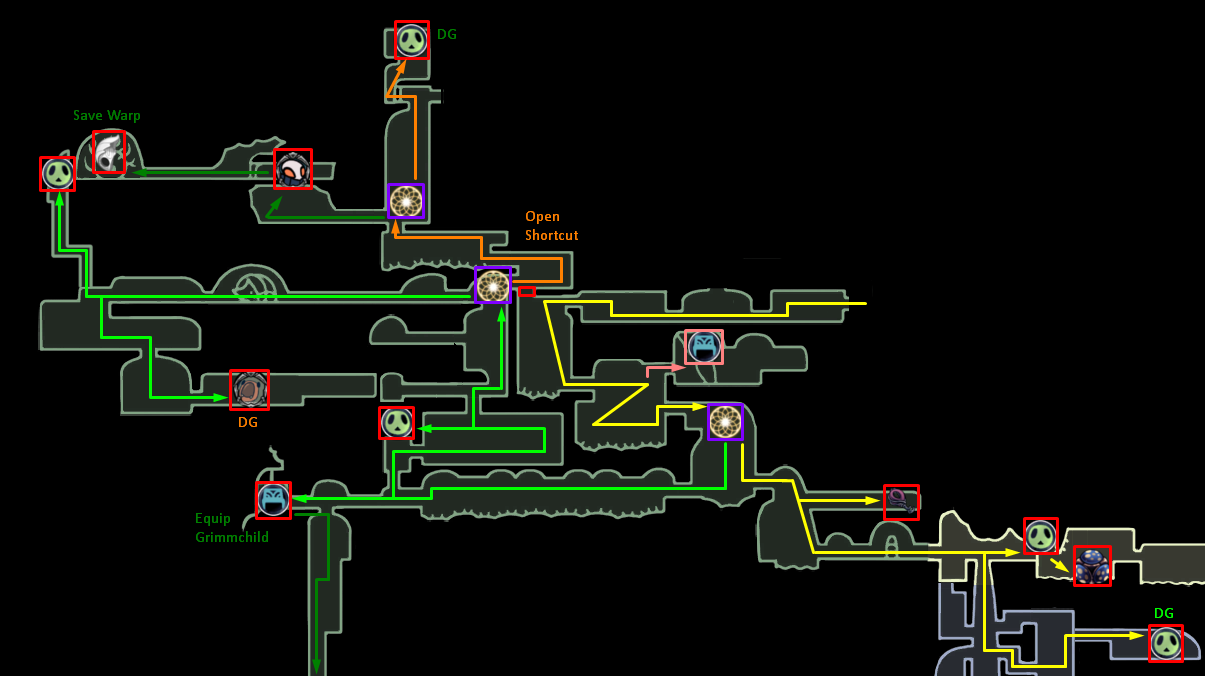 There are 3 grub mimics in the Deepnest grub room, the real one is one before the last.
As said on the map, make EXTRA sure to open the shortcut for later. This will be needed for the Flower Quest.
Equip Grimmchild before heading to Deepnest!

Talk to Brumm before entering Beast's Den to get a flame.

Use the Beast's Den Bench skip:

As seen in the video, you can use Shade Cloak to go through Devouts.
Don't forget the grub in the Den.
Make sure to pick up the King's Idol after saving Zote.
You can get the spring bench instead of the Dreamgate before Nosk if you are at low HP. 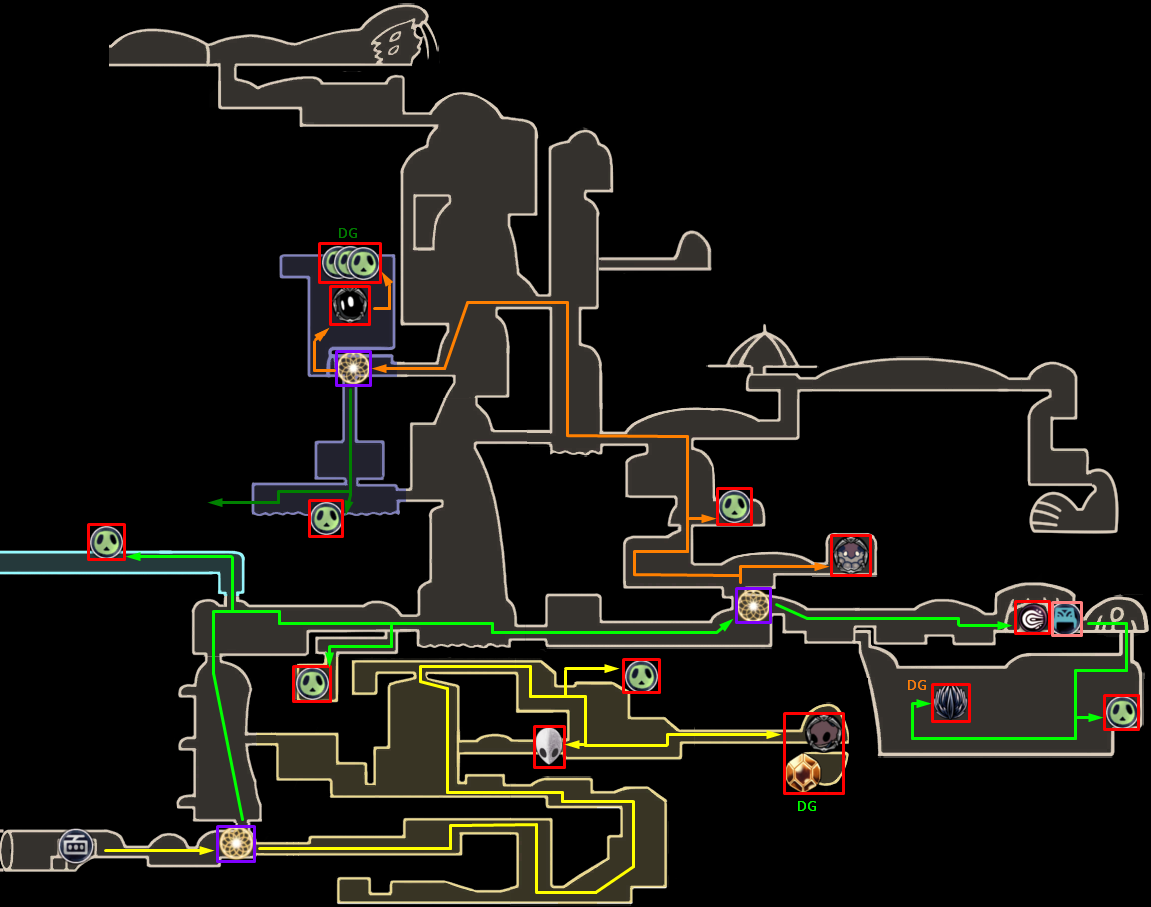 Collector Scream Skip (Credit to Ax2u for the setup): 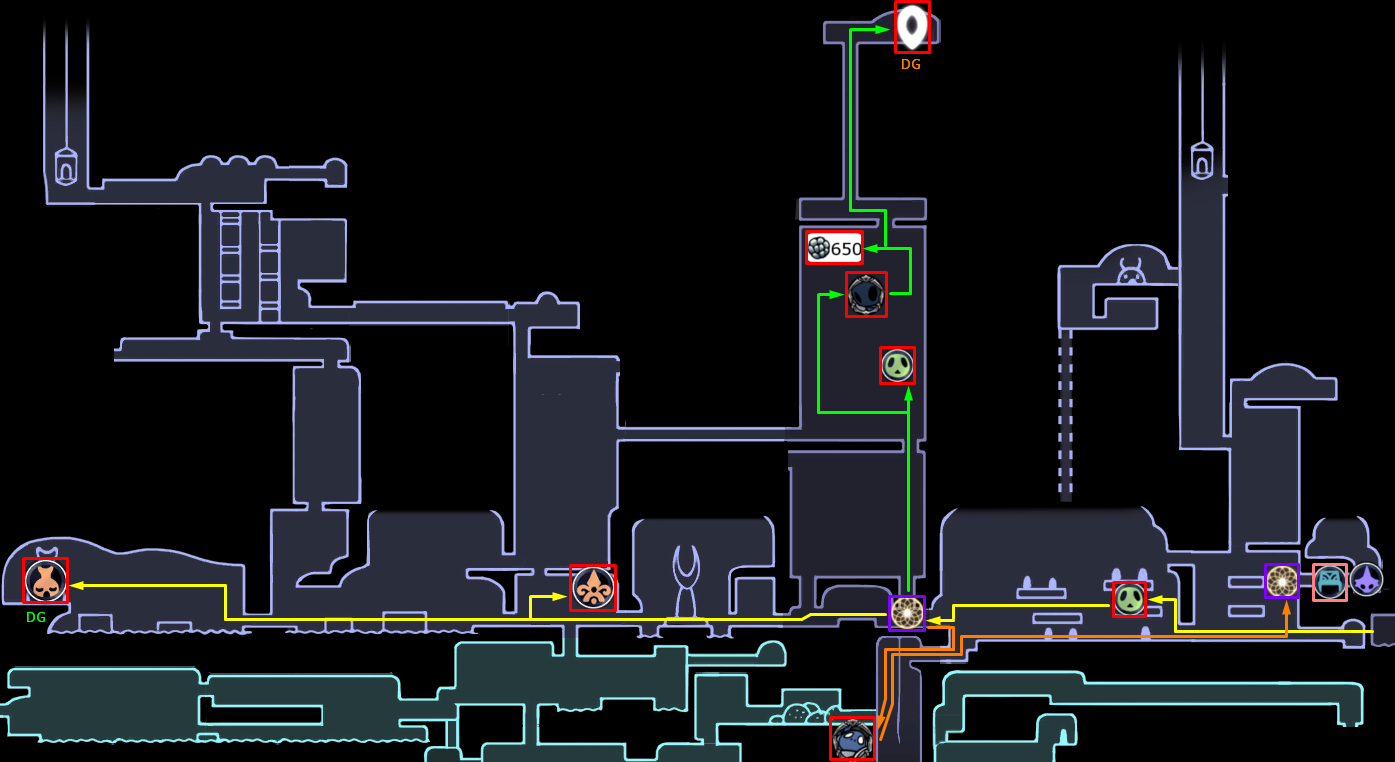 Get 3 nail upgrades at once when you get to the Nailsmith.

*Note that you shouldn't need to pick up the Watcher's Seal, assuming you didn't miss on too much Geo.
After White Defender head to King's Station, set there a Dreamgate and continue on to Part 4. 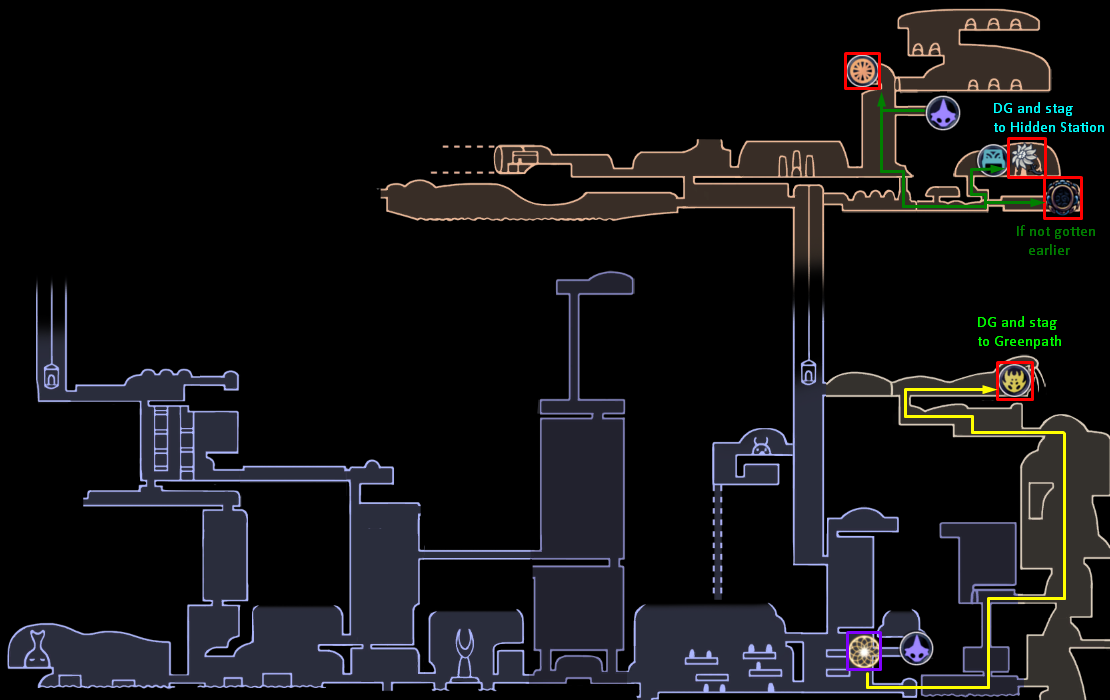 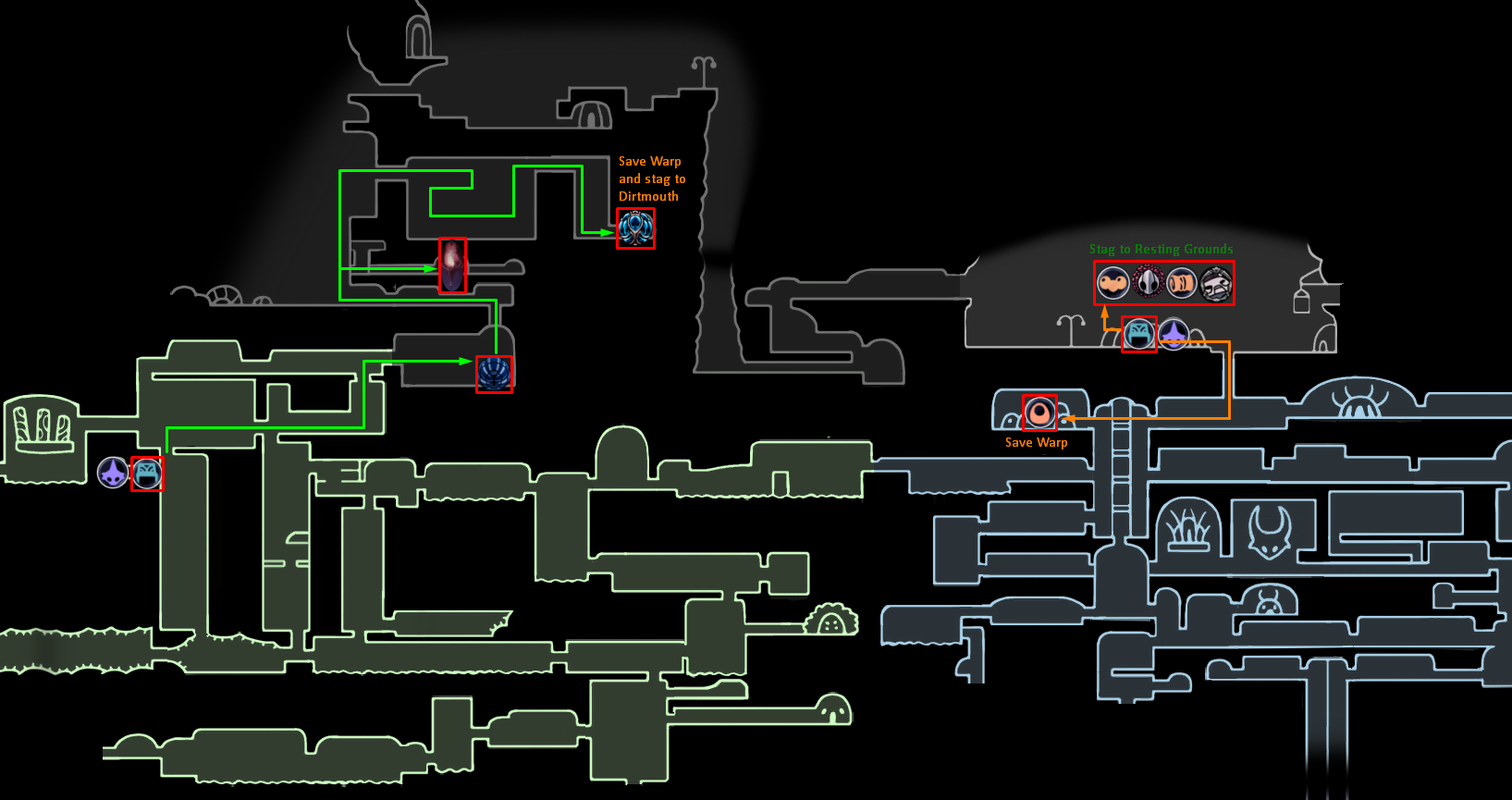 You should have all the grubs freed at the time of visiting the Grubfather to claim all the rewards at once.
Make sure to not forget anything in Dirtmouth:
• Sly's Charms, Mask Shards & Vessel Fragments
• Wayward Compass from Iselda
• Bretta's Mask Shard + Grey Prince Zote
• Carefree Melody from Nymm

When at the Resting Grounds, don't forget to grab Soul Eater if you haven't gotten it earlier.

• At Salubra, buy her Charms + 2 Charm Notches.
• Get the Mask Shard before the hotspring in the Infected Crossroads. 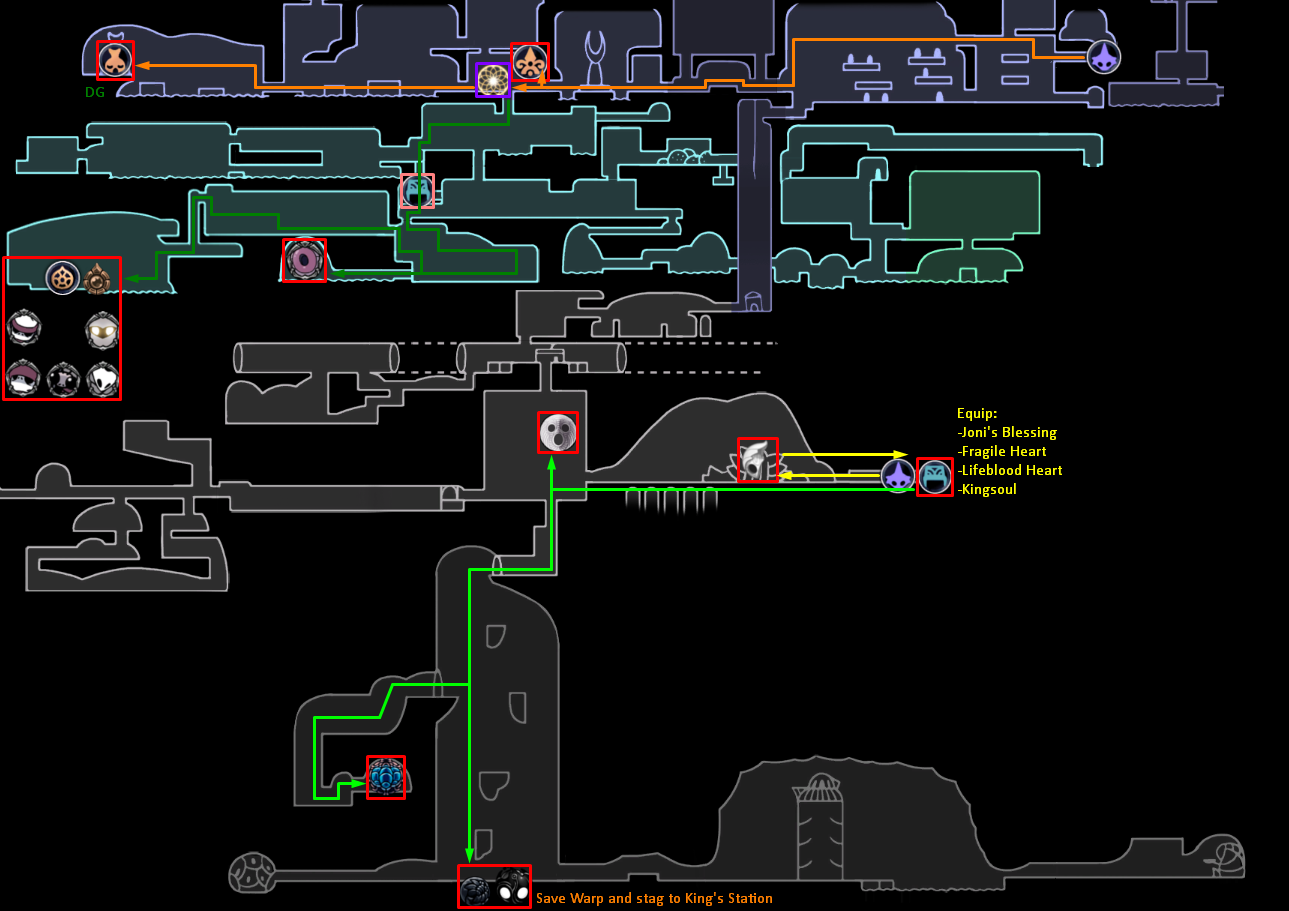 Here is an example White Palace run to show all the skips that can be used there:

After White Palace, sit on the station bench and change charms into Joni's Blessing + Fragile Heart + Lifeblood Heart + overcharm Kingsoul.
Make sure you are not forgetting the fountain Vessel Fragment before going into the Abyss.
Don't forget the Arcane Egg in the Birthplace before Void Heart as well.
After Flukemarm and picking up Flukenest, head to the Junk Pit, and beat all 5 Pantheons. 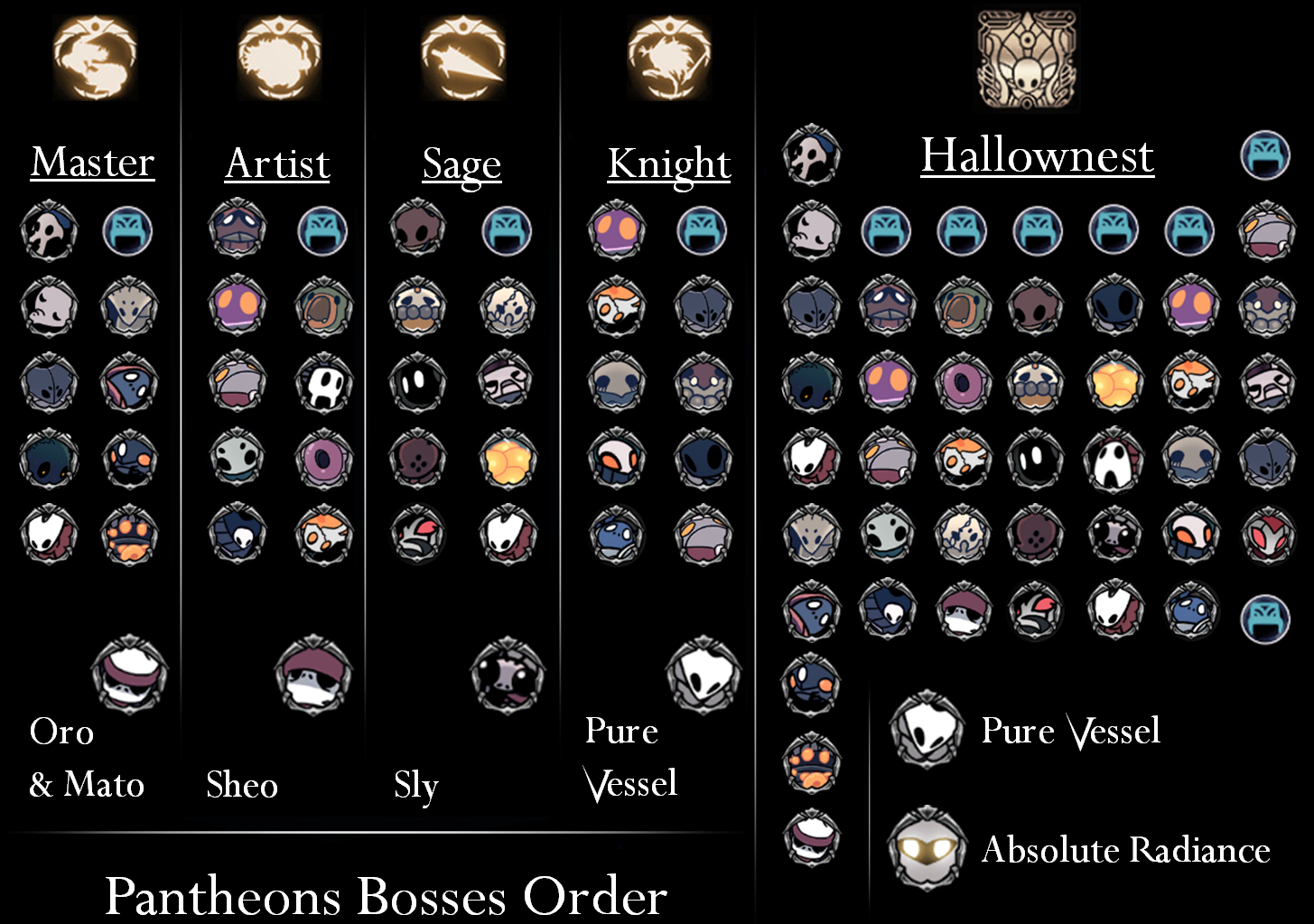