I remember many years ago viewing the beginning of a highlighted run which started just as the previous attempt was coming to a semi-disastrous close. Sometimes a VOD like this was accompanied by a remark signaling frustration or lost hope which, I suppose, the runner felt was a bit of amusing juxtaposition, hence why possibly they chose to introduce their run with it. Maybe they just wanted to remind the viewer to not get it twisted as speedrunning is a long series of failures with a win sprinkled in here and there. To some, being forced to abandon this would be nothing more than another case of speedrunning being further drained of its soul. I completely understand, but do you know what drains my soul? When a new submission includes a linked video containing any number of attempts prior to the start of the run/attempt which the submitter wants verified. Over the years, I've seen handfuls of submissions like this. Sometimes the actual run doesn't start for 5 to 10 minutes (OR LONGER) and we have to click through these wonderful introductions, attempting to find where the actual run begins.

I'm going to chalk it up to laziness on the submitter's behalf. They may have thought that they had the correct attempt, but failed to adequately check. Maybe some of these cases are the result of the runner highlighting the entire broadcast because the attempt was somewhere near the start and, "Ah...what the hell..., I'll just drag that slider over to 00:00! That was a breeze!" To those of you who have been a perpetrator of this horrible crime to our leaderboard, just add an attempt counter if it's too hard to correctly identify the start of the attempt that you want the video to begin with. Cut the video so the attempt begins soon after the start of the video. If you want to include the final moments of the previous attempt, go ahead, if you must. However, I'd encourage all runners to cut their submission videos so the attempt begins almost immediately after the start of the video. Do make sure to include at least some frames of the white splash screens as we need to be able to see when the first black frame appears. There will be an examples of these below.

KyleKyle
SWEATSHIRT HAS BEEN MOVED TO CATEGORY EXTENSIONS
By

The board can be found here ---> https://www.speedrun.com/gtamemes#IV

All runs, including obsolete runs, have been moved. 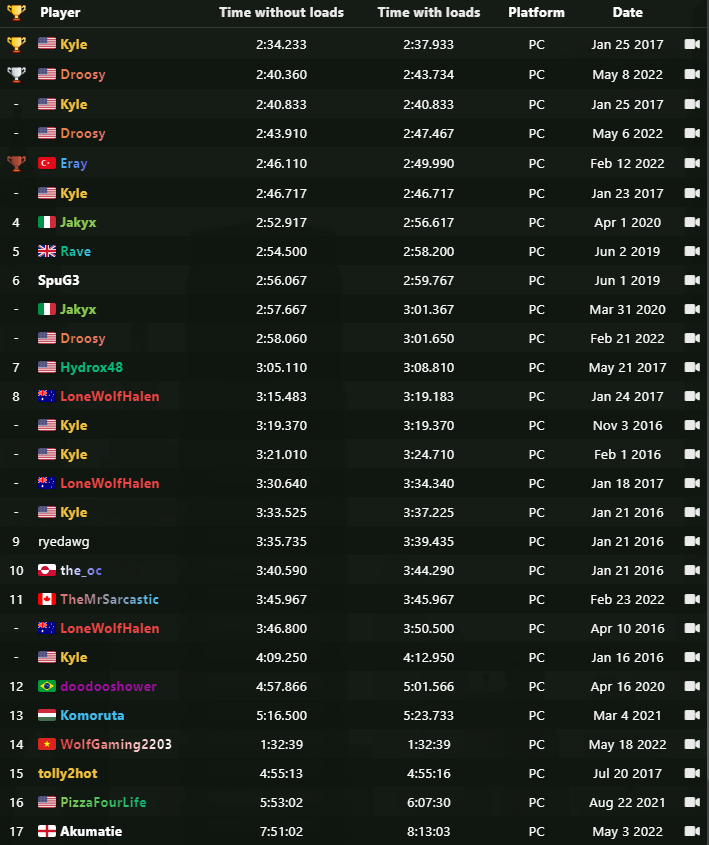