This video shows the old method for boosting for the Voidclip which is much more random and prone to failure. Please refer to the How-to section below for instructions

- When you enter the map, Save Delete. You need to do this to get sufficient ammo and health.
- Continue through the map as normal until you get to the big glass door with the broken turrets where the cutscene starts. Turn around and grab the while COOLANT barrel.
- Go back to the ladder and line yourself up with this line on the floor 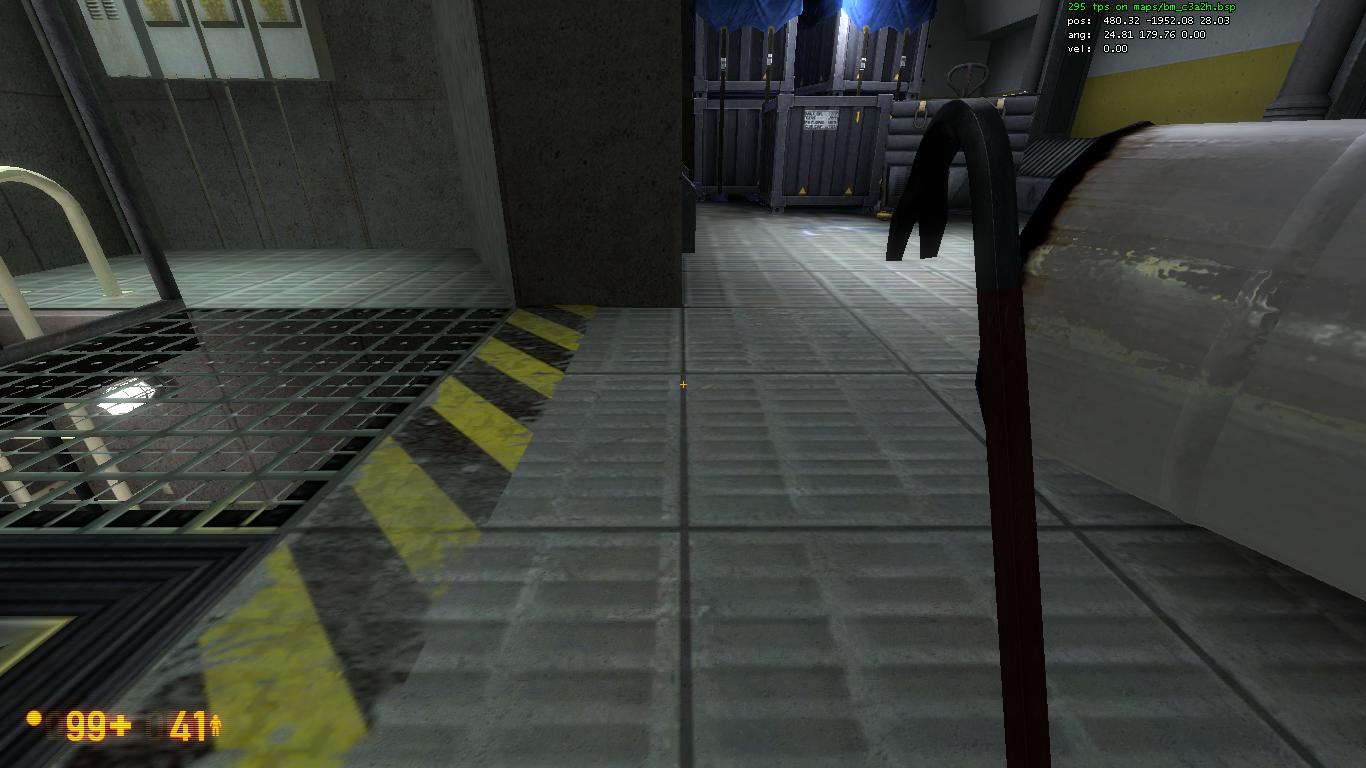 - Now take the barrel and look at about -179 yaw and do a propclip with the barrel. Remember to keep yourself aligned on that line when you clip.
- After clipping, keep Save/Load buffering until your z coordinate is from -145 to -155.
- Make sure that you are still clipped inside the wall of the elevator shaft by checking if your velocity is anything but 4.69 UPS. If it is 4.69 UPS, that means you are no longer clipped inside the wall and you are in the Void. If this happens, redo the clip and correct your position.

- When in position, aim at 70 pitch and put your crosshair on this line here 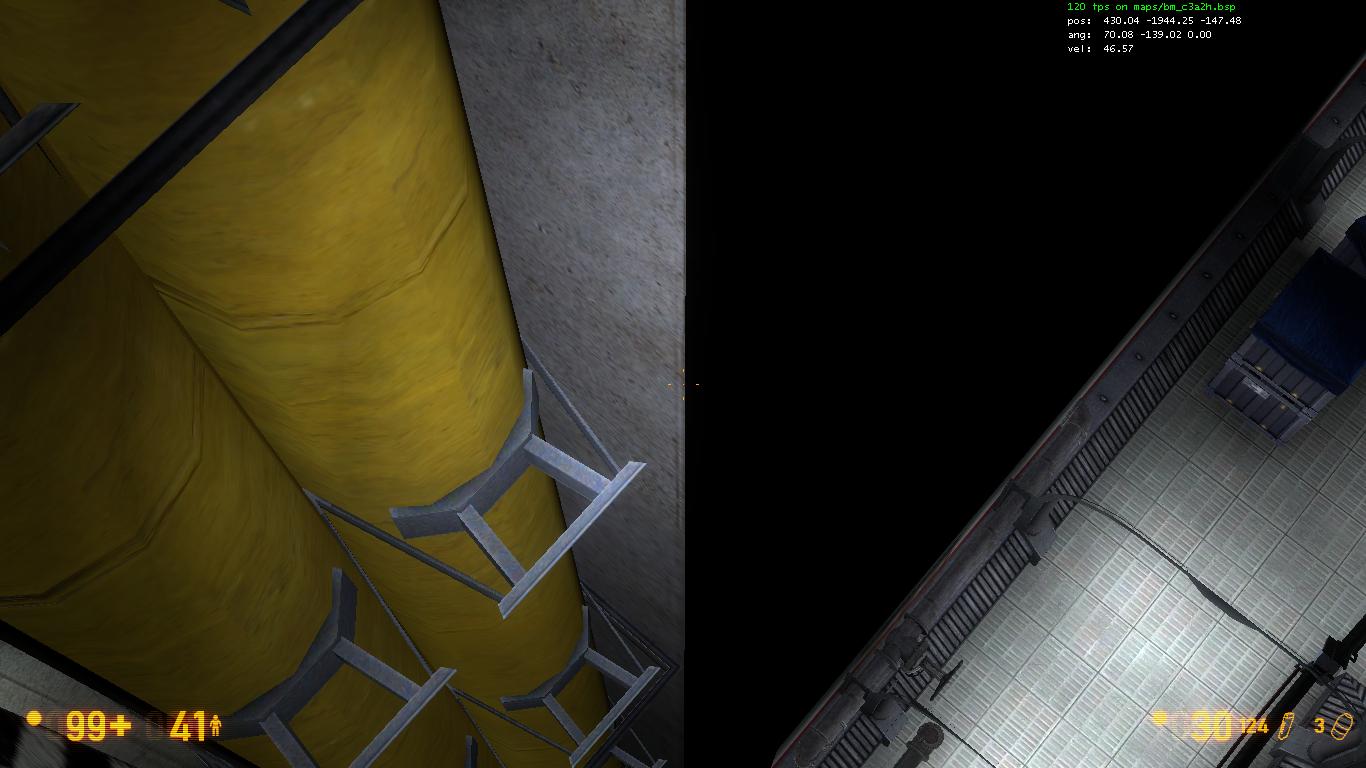 - Switch to your SMG and fire all 3 SMG Grenades; then switch to the Gauss and Gaussboost using all of your ammo.
- Now switch to the Hivehand and aim at 40 pitch while still having the crosshair on that line. Fire a few bolts until your speed reaches 2000UPS.
- Save/Load once, then turn your FPS down to 30.
- Continue Save/Load buffering and turn your FPS back to normal when you're over the ceiling of the supply depot, which is where the cutscene'd take place.
- Continue Save/Load buffering until you're right above the airlock at the end. 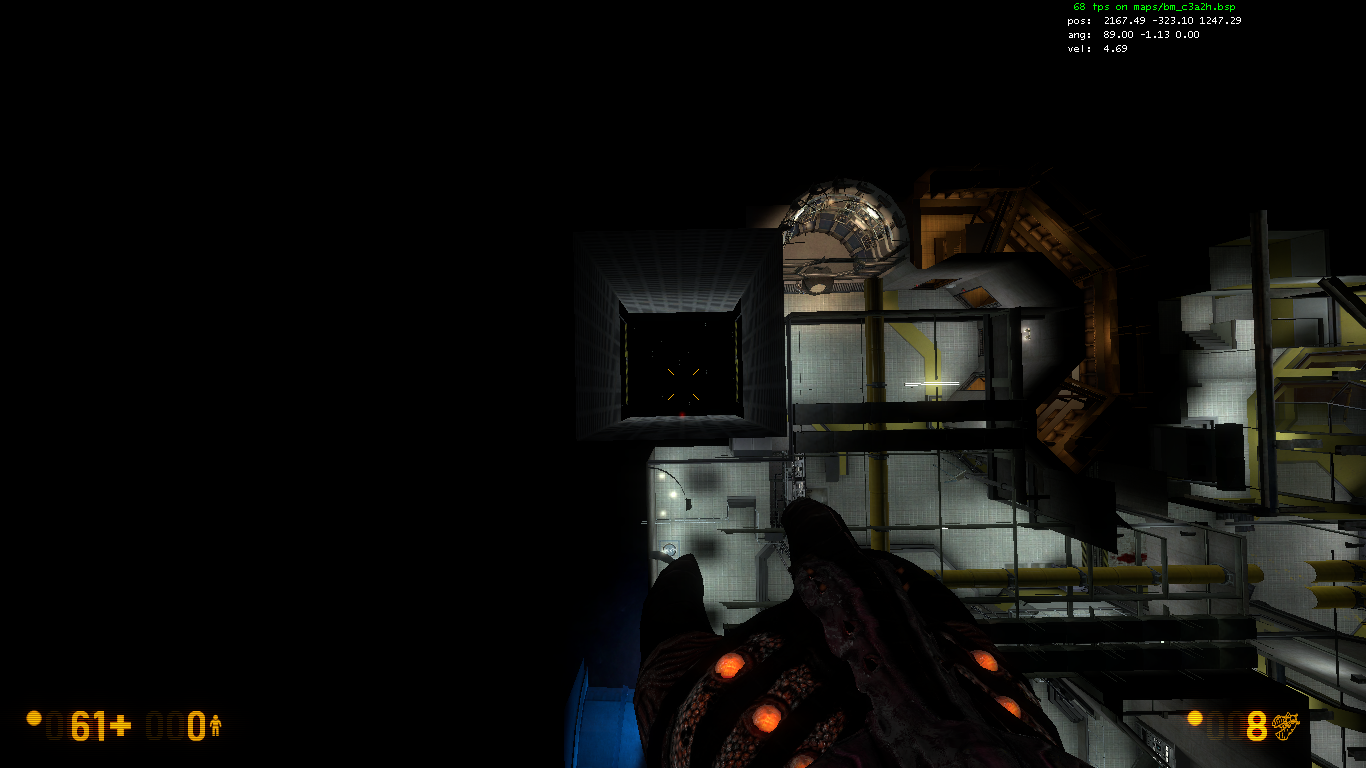 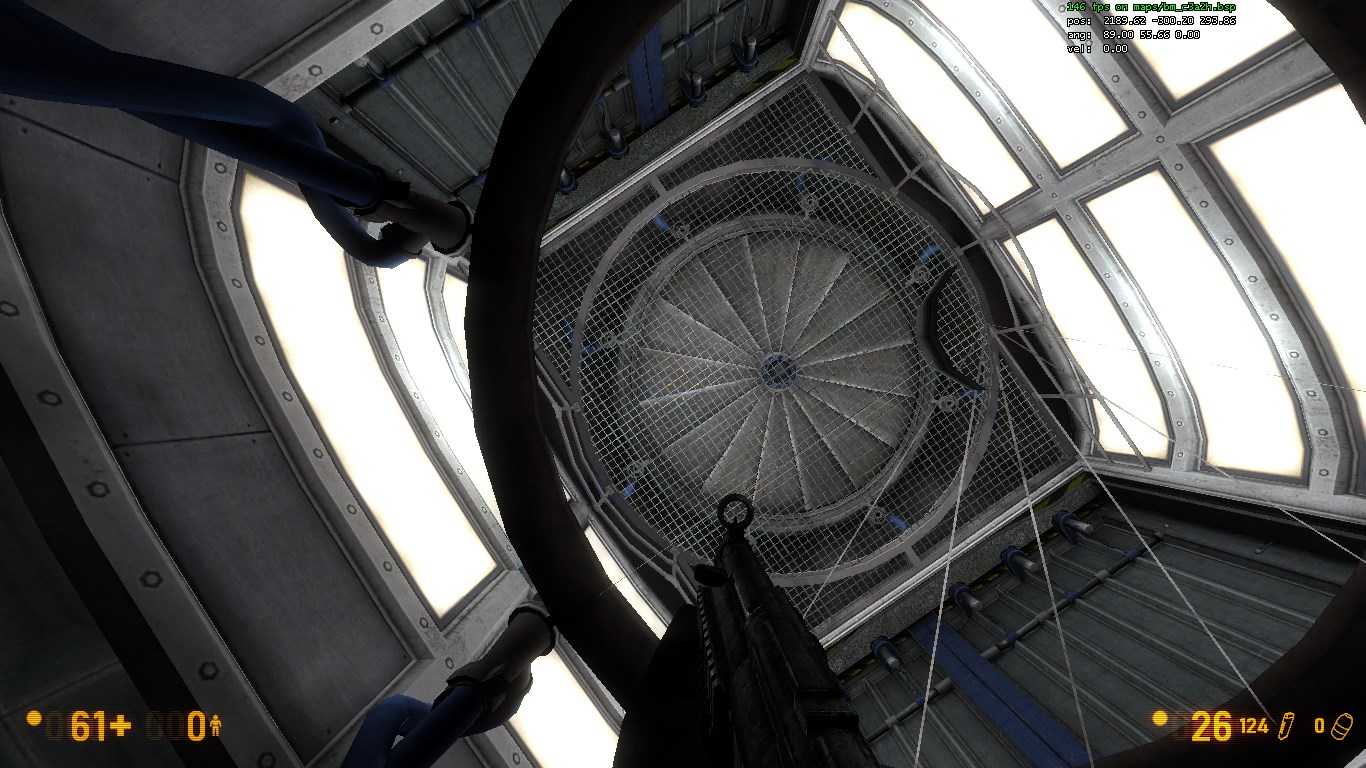 - Walk off the gap around the fan to drop down and finish the skip.

Why clip down through the shaft?

As mentioned in the Voidclipping guide, you cannot clip through a brush from the side or from below, you have to go above a brush to be able to clip into it from the Void. In this case the airlock has an unusually tall ceiling. 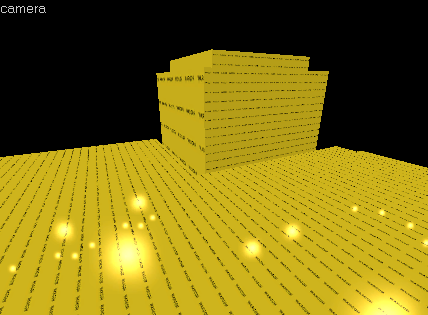 The airlock viewed in Hammer Editor

The community has tried many ways to start the clip along the main hallway, but to no avail as the map geometry didn't allow that to work as wanted. Another problem is that you would need a lot of vertical speed in order to get over the big blue-ish turbine room. If you were to try to get a lot of vertical speed to get over it clipping from the hallway then you'd rise back up from the ground, ending the clip prematurely every time; the same is true with horizontal speed.

The path from the shaft has the least amount of things that we could collide during the clip. We need to minimize the things we bump into as they could affect our path toward the airlock at the end, especially when its' ceiling is so small.

Because we have to go so far upward in such a relatively small space, we will need to do everything possible to maximize the amount of height gained from the boost. For unknown reasons, switching to 30FPS while doing Voidclips will help lots in gaining height. And we turn back to our normal FPS after we've gotten over the supply depot to minimize the height we get there; as we'd want to be as close as possible above the airlock's ceiling to minimize the amounts of Save/Loads needed, thus saving some little time.

Why can't we clip from the supply depot?

The airlock's walls and floors are entirely separate from those in the supply depot. Similar to Voidclipping, you cannot clip into another brush different from the one you're already in if we approach it from the side. So no matter how much speed is gained to clip into the airlock from the supply depot, we will never make it.